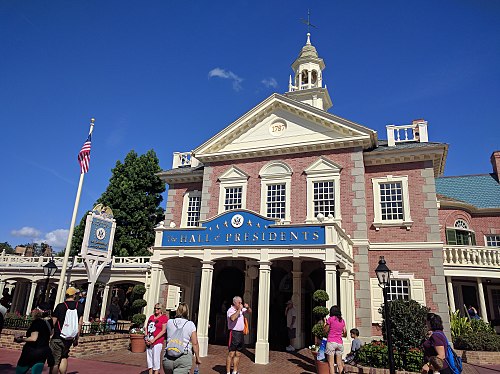 The Hall of Presidents

The Hall of Presidents is an attraction located in Liberty Square at the Magic Kingdom in the Walt Disney World Resort. The attraction is a multi-media presentation and stage show featuring Audio-Animatronic figures of all 441 individual United States Presidents. It opened on October 1, 1971, along with the rest of the Magic Kingdom and resort.

Housed in a building resembling Philadelphia’s Independence Hall, the current attraction features a short film depicting a historical account of several American presidencies, notably George Washington, Andrew Jackson, Abraham Lincoln, Theodore Roosevelt, Franklin D. Roosevelt, and John F. Kennedy. The film is followed by a stage presentation of all the presidents in Audio-Animatronic form and features speeches by Lincoln, Washington, the incumbent President and others.

This is the morning opening of a park… In most cases, Cast Members actually hold a rope and drop it to allow guests into the park.